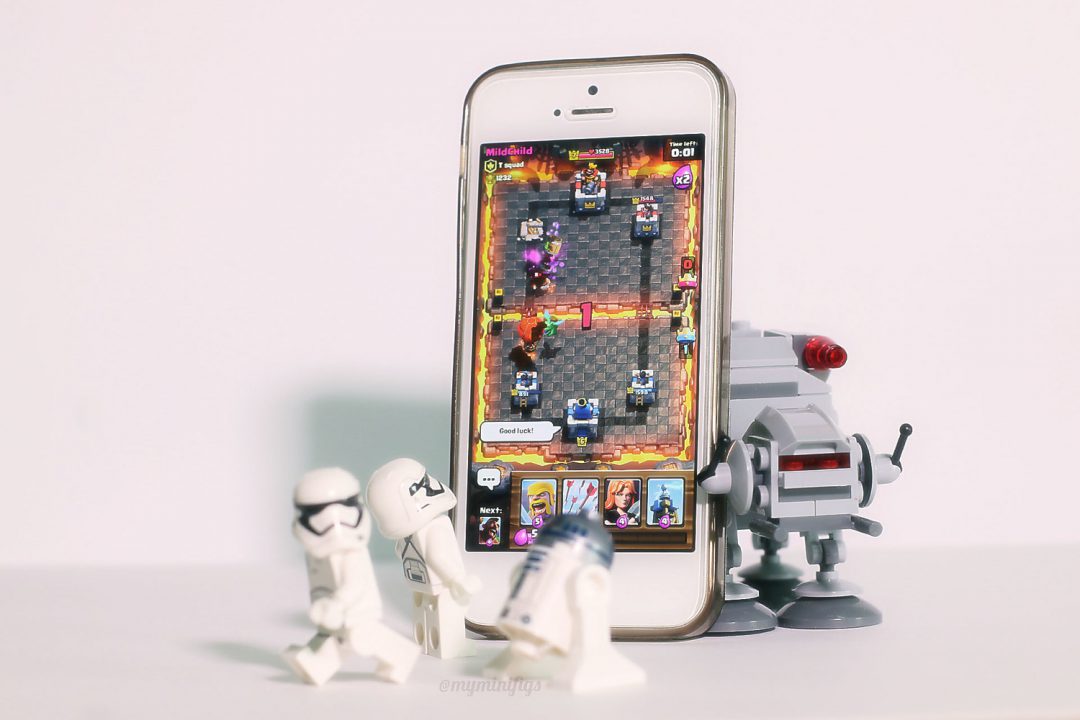 Who doesn’t know Clash of Clans. The game that was released for iOS back in 2012 and Android in 2013 has achieved a lot of things; and by a lot, I mean really a lot. Even at the early time when the game has just released, Clash of Clans has shown a really good potential, becoming AppStore top 5 download between December 2012 and May 2013. It finally rape it sow during last year, when Clash of Clans became the top grossing app on both iOS and Android. Clash of Clans even generates a huge 1.5 million dollars per day!

The gameplay that’s offered by Clash of Clans was a fresh idea at that time. You get to build a defense, gold producing machine, then build troops with the gold you’ve produced. Afterwards, you get to attack other players to get more gold, and repeat that again. I know that this isn’t a fresh idea anymore since so many games have copied this mechanic and use it as their core. However, that’s not the reason why this game was able to generate 1.5 million dollars in 2015. It is in my opinion the community behind the game. The ability to create clans, defending and attacking other clans together, supported with reliable network server, making this game is the next ‘World of Warcraft’.

Now after a huge success in 2015, the developer of Clash of Clans, Supercell, wants to repeat that success again with the same community and similar policy, but with a fresh gameplay. To do that, Supercell creates another real-time multiplayer game starring all the familiar characters from Clash of Clans, called Clash Royale. 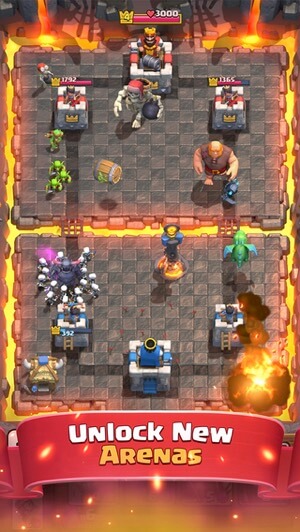 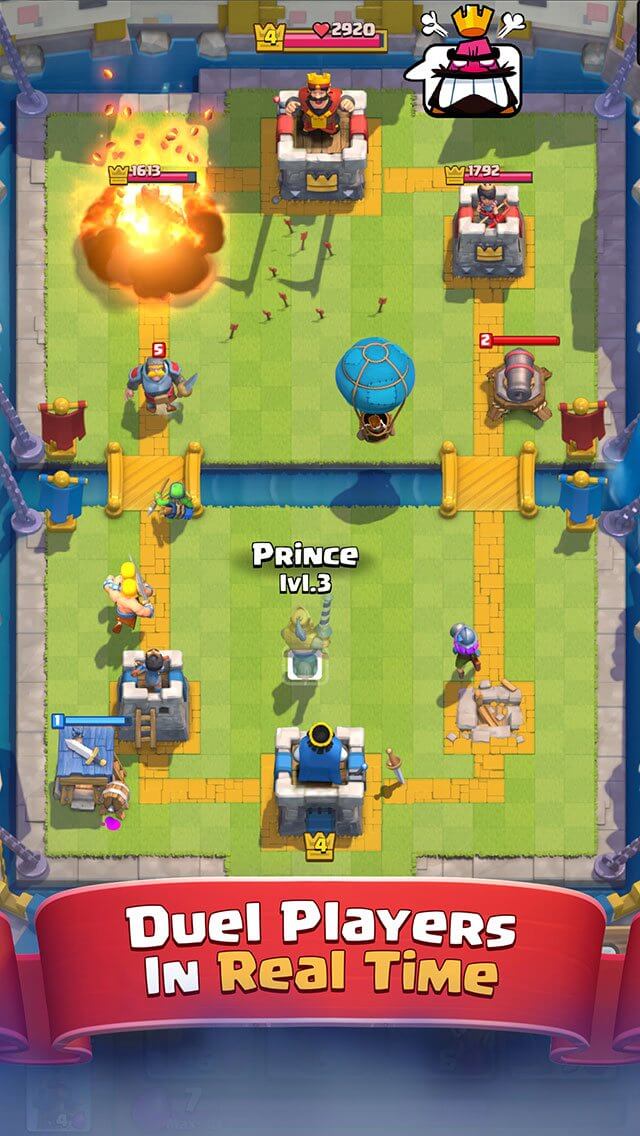 Clash Royale continues the story from Clash of Clans where you will be battling against other players. Only this time, you will do it in a more manner, official way of fighting each other, inside the arena. The higher your winning rate is, the bigger arena you will be, the harder enemies will wait for you there. Whenever you’re losing or winning, it’s the trophies that’s on the line. Losing too many trophies, you will be demoted into a smaller, uglier arena. Winning too many trophies too fast, although you will have a bigger more beautiful arena, enemies that’s waiting there will be too hard for you.

It’s all about battling and this video will show you the cruelity of war (probably).

Clash Royale is a real-time multiplayer game with card collections system as their core. The basic game is that you will have a head-to-head battle to protect the castle and two towers of yours for a certain time. Lose your castle and you will be automatically lost. Lose one of your tower until the time runs out, if the enemy has more towers than you, then you lose.

To attack the enemy’s castle, you will have a deck contains of 8 cards. With these cards you will be attacking enemy’s castle. Each card will be like a summoning card. When you have enough elixir, you can summon them and they will be battling for you. Of course, each card has different strategy to play, timing and elixir cost to summon, and ability that makes a card more suitable as a common, a rare, or an epic card.

Inside the battle arena, at one time, you will only able to held 4 cards at most. To be able to cast a card, you will have to pay that card’s elixir cost, which will be generated overtime. You can place the unit anywhere on your area, and they will be running towards the enemy. Once you’ve destroyed one of the tower, you then can place the units on enemy’s area.

A game will only be running for about 4 minutes, tops. For basic game, you will have three minutes, with the last minute will be providing a double elixir generation, giving a more hectic battle at that last minute.

Once you’re able to destroy a castle, you will be rewarded with a chest and some trophies. When you’ve collected enough trophies, you will be promoted into a new arena with new enemies as well as new cards to strengthen your deck. This is where chest plays their part. Chest will reward you with some cards depending on which arena you’ve won them from.

With the cards you’ve collected, you can build a deck of your own. A deck can contains at most 8 cards of your choice. Whenever you collect the same card and fulfilling the requirement, you can upgrade the cards. There’s also store where you can purchase extra cards with the coins. You can also join some clan where you can request cards. 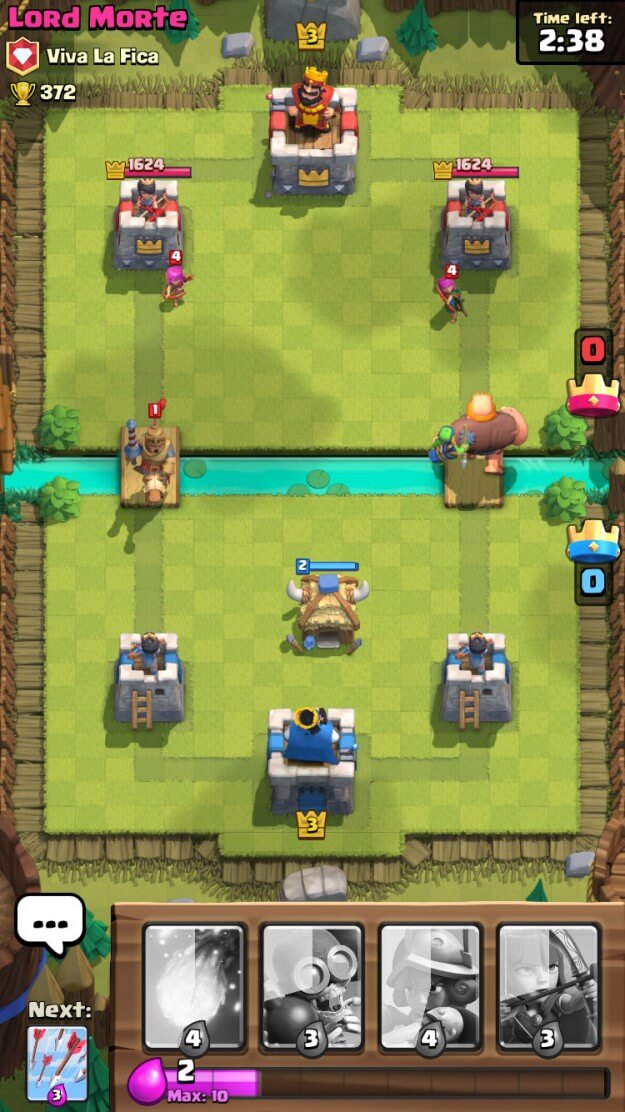 It’s been straight two weeks since I’ve started playing Clash Royale and I can’t believe that I’m still talking about this game with my colleagues and friends. It’s just a F2P game and usually I will only spend around half to one week tops playing this kind of game. The combination between multiplayer and deck building really is a great combo for the reason.

I think the fresh gameplay is also another selling point for Clash Royale. With so many games being released on weekly basis at the AppStore, it’s pretty surprising that a big developer like Supercell cares to bring a new gameplay into the market. While most big developer will only copy a gameplay that’s proven in the market and pour big chunk of money into the marketing, Supercell dares itself by using some fresh and bold gameplay design despite their previous success with Clash of Clans.

The characters design also plays a huge part in Clash Royale early success into the community. By using the same characters in the game they once love the most, the game gives familiar feeling for the players. It’s like they’re playing the same game, but with fresh approach.

The team in the Clash Royale also doing a great job in keeping the community alive. By adding TV Royale, the community manager clearly keeping the flame burning inside the communities. That and also with the help of the forum that keeps the discussion alive.

I’d also like to applaud the backend guys. Personally, I know several thing about computers and servers. I assure you that building a multiplayer game with great stability like Clash Royale requires high skills and knowledge. By far, I have no problem whatsoever with connection problems or request timed out, something that I really find a lot in similar games. 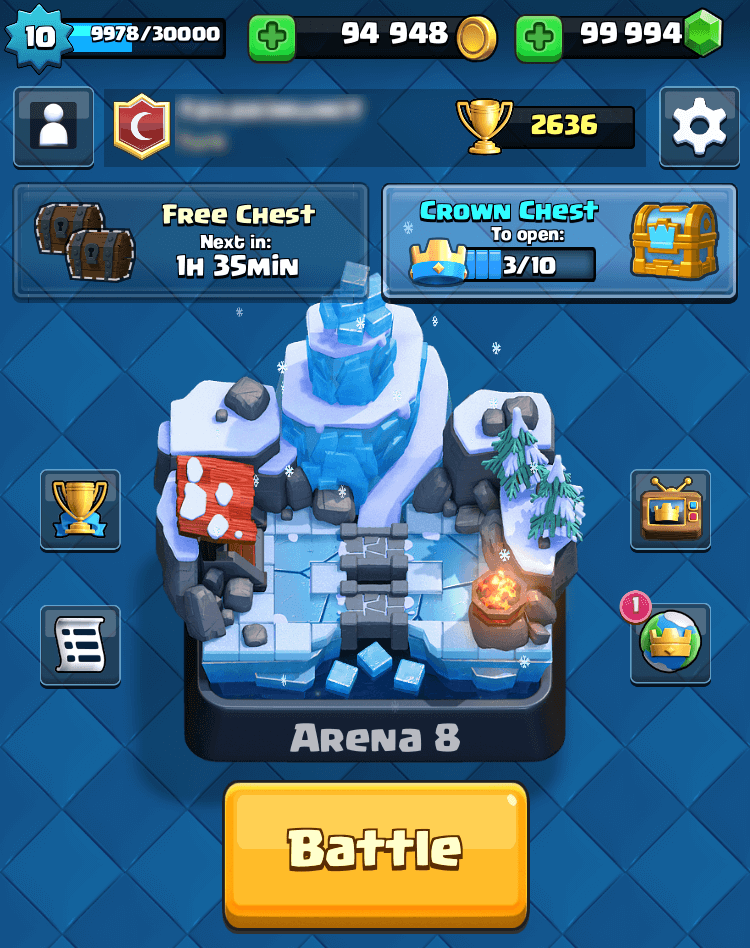 The best part of playing Clash Royale is the limitless possibility and strategy that you can use in destroying enemy’s castle. From the deck you can use, the counter strategy for each unit, up to a strategy called The Kill Zone. It’s limitless strategy gives this game a never ending fun (for this moment). So these are some resources that I’ve collected around the net, complete with the sources website about the strategy and deck. I will also put my own deck here, although it’s not that strong yet.

As for the kick-off, this article explains about some basic knowledge so you can up to speed with other players as well. The article can be found here. To summarize, the content is about all the basic knowledge, why you should join a clan, matchmaking system, why you’re getting dropped from the arena you’re currently fighting in. If you have no clue about this game at all, you should probably go to that page and read the whole thing yourself.

However, if you’re not that ‘new’ to Clash Royale and but unfortunately have taken a lot of defeat from other players, I’d suggest you to read this common mistakes that usually done by the ‘not-so-new’ players.

I think the most important tips from that article, is to not being hasty. Playing safe means that you don’t blindly attack by dropping units right on the bridge. Wait until your opponent attack you first, then drop your unit behind your tower. In this way, you can have additional damage from your tower, then you can push back your opponent. More explanation can be read from that article.

The next article that I’m about to show you is a bit more advanced, but I think everyone that start their journey in Clash Royale should read this article. Titled with Basic Guide to Attacking and Deploying, the article highlights the general strategy of how you should deploy your units, which tower should be attacked first, and types of damage. Then, if you’ve understood basic attack and deploy technique, read the tips on How to Lure Troops Properly. This will boost your strategy and some tricks in winning the match.

Ash (one of the high-profile player in Clash Royale) shares his tips on How to win every time. Bottom line is, no one in Clash Royale will be able to win every time they play. If you’re having a streak of lost, don’t worry, perhaps, it’s time to take a break. Try taking a break from playing and play again in a few hours. You will have your winning streak back.

Before we’re moving on, I’d like to share the most important article that I’ve found in clashroyalearena.com. It’s a tips to counter every card in Clash Royale. The writer even promises that he will be updating the article as soon as he finds a new one. I’ve tried his tips several times and it works like a charm. So this is “How to play and counter every Card”.

The reason why playing this game so much fun like I’ve said just now, is because of the community. Clash of Clans has been a huge success, mostly because of their community that’s really alive and has contributed so much inside the forum.

Similar to its predecessor success, Clash Royale has shown a great potential in its community building. The forum felt so much alive and there are great resources here and there surrounding the game. If clashroyalearena.com gives you almost everything you need about Clash Royale, clashroyaledeckbuilder.comgives you everything about deck.

It has most used deck, highest rated deck, and even there’s also guide that will help you learn how the deck played. So if you want to build real deck, you need to go to this website and feel free to explore all the decks that used by Clash Royale’s players.

Clash Royale is an awesome game. Despite its free-to-play system, it doesn’t bother any of its player. Everyone would still be able to have the same amount of fun, given that player has the skill to at least defeat several players though. Nevertheless, if you’re one of those fans of Clash of Clans, or perhaps a fan of real-time strategy game, Clash Royale is that kind of game you couldn’t resist of not playing. Addictiveness is certained. So don’t tell me I haven’t warn you yet.