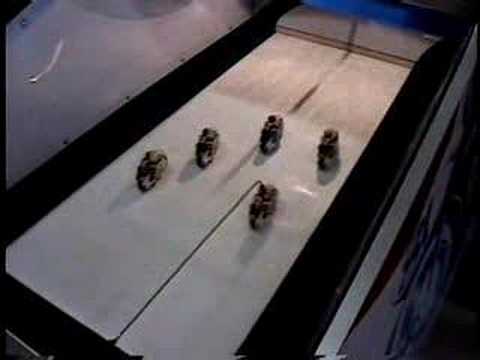 I couldn’t ride a bike, let alone racing in a motorbike. However, I’ve always enjoyed myself playing with motorcycle racing arcade machine during my childhood. While imagining myself as a real rider, I often made the voice like “VROOM VROOM” (who’s with me?). Nevertheless, it was a good time and SEGA ManX TT was one of my favorite motorcycle arcade machine game at that time.

However, long before I was even born into this world, long before the developers were even used digital screen for the UI, there were racing arcade games that only use magnets, papers, relying on mechanics and natures. SEGA was one of the publishers of this kind of game and they called it Moto Champ. An arcade game that was first published back in 1973.

Fast forwarding a little bit. In 1983, the closest thing that perhaps was the ancestor of Gran Turismo or Forza is launched, it’s called Tomy Racing Turbo Dashboard. Tomy’s driving simulator set the standard for racing games on the home gaming circuit by creating a machine equipped with four-speed gearshifts, speedometer, key ignition, and digital viewing screen.

Now let’s get out from our time machine and facing the real life. Kalin Krastev, the man behind a company called RKD Zone, trying to bring back the future into our past. Combining 3D technology with classic electromechanical toys like Moto Champ and Tomy Racing Turbo, was the idea behind Moto RKD Dash.

Moto RKD Dash: The Premise and The Gameplay

Moto RKD Dash brings you to the day of the future past where you will be dashing past the opponents and reaching the FINISH line before your tank runs out. You will be brought around the world and having a trip into the past. Truth be told, Moto RKD Dash doesn’t really have any storyline. It just wants to take you into a nostalgic trip, playing a racing game, but with beautiful graphics. There are several obstacles that will hinder you from reaching your goal. Everytime you crash into these obstacles or other riders, your speed will be slowed down and you will have to build your speed again from the ground up. The road in Moto RKD Dash is heavily inspired by Tomy Racing Turbo. The road will be sort of like a loop circle with some banks to the road. When this happens, forces pull the bike to the outer edge, so you will have to hold the other direction and stay on the road.

If anything I love about the game, it’s the beautiful graphics that I love. It is no surprise with the graphics quality of the game since Kalin got his masters in Visual Communication Design a century ago. Not only that, he has been working as graphic designer and animator for the last 20 years. So I’m telling you, you can expect a very beautiful graphics in Moto RKD Dash.

Not only the graphics that were made beautifully, even all the small details inside are spotted on. From the models, the bikers, the environments, even the small effects when I collide with the obstacles.

I also love the musics created by two amazing musicians, Kliment Dichev and Approxima Astrolabs. I will embed both musicians playlist that their works are being used inside Moto RKD Dash.

The game isn’t that hard. It’s frustrating but isn’t impossible. Once you get a hang on how to avoid the obstacles, you can actually finish the game without breaking a sweat. Here are some tips that I’ve found while playing the game and browse the forum a little bit.

Moto RKD Dash is a beautiful product. It’s a casual game that you can always go without thinking. If you’re that kind of person that loves to have some nostalgic game and turn back time, Moto RKD Dash is definitely for you. RKD is a one man team with Kalin Krastev as the mastermind behind. Moto RKD Dash is his first SOLO game, everything in it from graphics, logos, models, interaction, sounds…all the way to the website and promo stuff was done by himself. Except of course the music, that was done by 2 amazing musicians (check out the game page for more info on them). If you want to support Kalin, please do so by visiting his website, twitter, and facebook.