Transfer window period is starting to unveil its curtain, and this period only means for me and I believe most football fan out there, to read the football news everyday. Well, this couldn’t be help since the transfer can be dealt any time during the office hour.

That also means that any football fans should be prepared for the best or the worst scenarios; I’m talking about club’s targeted players. It can be that your team will get the players and the worst, your rival gets the player. Afterwards, the hottest players in this transfer market period normally would be publicly doing some fancy kick-up skills in front of the fans. In KickUp King, you will try to keepy uppy football’s ball in the air as long as possible. You can let ball touch the ground, but don’t let it lost its bounciness. You can’t also let the obstacles hit your ball, because when that happen, you lost your chances.

There are 4 modes available in KickUp King. In Amateur mode, you will have three chances to lose the ball either by its bounciness or obstacles. In Pro mode, you will only have one chance.

Yes! In this game, you won’t only doing some basic kick-ups, because, honestly, who wants to play a 8bit game just tapping the screen, waiting for the ball to come near your feet, kick it again and waiting for another chance?

So, beside doing kick-ups, there are some other tricks that you can do with KickUp Game. You can do headers, knee-ups, cross-kicks, side-kicks, you can also do some neck control like Gareth Bale did in his presentations with Real Madrid.

Moreover, there are a bunch of unlockable fake players across time. You can use Ronnie, Roberto, and even the latest football stars like Ibra. You can even use these legendary players to do some fancy kick-up combos from many famous football players. Beside the unlockable fake players, you can also unlock stadium where you will be keepy uppy the ball. KickUp King has some stadiums ready to be unlocked.

In order to unlock those fake players, as well as the stadium, you need to do something before. There are more than 20 challenges waiting for you to complete. The challenge are spreaded through all the modes. Mostly, all the challenges will require you to reach a certain point or time in the respective mode.

Now, you won’t be able to unlock anything if you’re not doing that combo. These combos, beside able to give significant point, it also able to unlock gold players (unlocked player). For instance, to unlock Ronnie you need to do Gaucho’s kick-up combo. To do Gaucho’s combo, you need to do a side-kick, then swipe up to do a back side-kick, then you go left to receive the ball on your neck with neck-control, and finally you do a back kick-up to finish the combo.

The combos are also inspired from the real world situation. You can check the trailer below to let you immersed with the game. 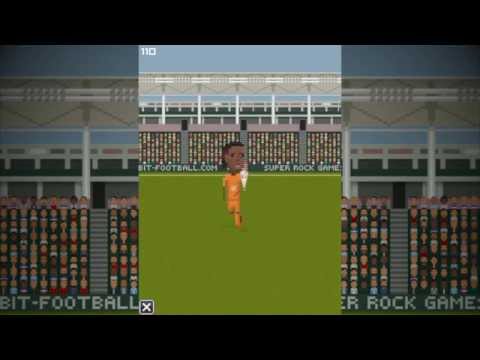 Like many other and most of 8bit games have, KickUp King also uses a chiptune music as its background. Even so, I love the way Super Rock Games handles the music in-between the game and the menu.

When you’re kicking up some ball, the music will be soften up so that you won’t be distracted by the music. However, once you’ve done with a session, the music volume will be increased again. Not only that, the music was created seamlessly with the way the ball fly. It’s like the music was a hint when to kick the ball.

I love how KickUp King turns out to be. By becoming a game that have a more casual approach, I find myself back to this game on my free time to kick some ball, doing some fancy combo, and then going back again to my routine. I’m not hesitate to recommend KickUp King to football fans that love 8bit and more casual football game.

As a bonus, Super Rock Games have been super kind with us to give 5 free promo code of KickUp King. To claim this promo code, you just need to tweet/share this article and mention us inside it. First come first serve 🙂 Super Rock Games is a small indie games company based in London,UK. It’s made of two person team, Matheus Toscano and Ammaniel Araia. Matheus is a talented pixel art artist. You can follow Matheus’s amazing pixel-art work in his website called 8bit Football. He also uses facebook for sharing his work.

On the other side, under the name Ammaniel Araia, comes a great experience in gaming industry. Ammaniel is a programmer with over 13 years experience in the games industry andhave worked on popular soccer games like Football Manager and Championship Manager. Between 2002 and 2005, Ammaniel was employed as a C++ programmer by Sports Interactive. He’s been responsible on international management, competitions, referees, manager contracts and awards code as well as general bug fixing.