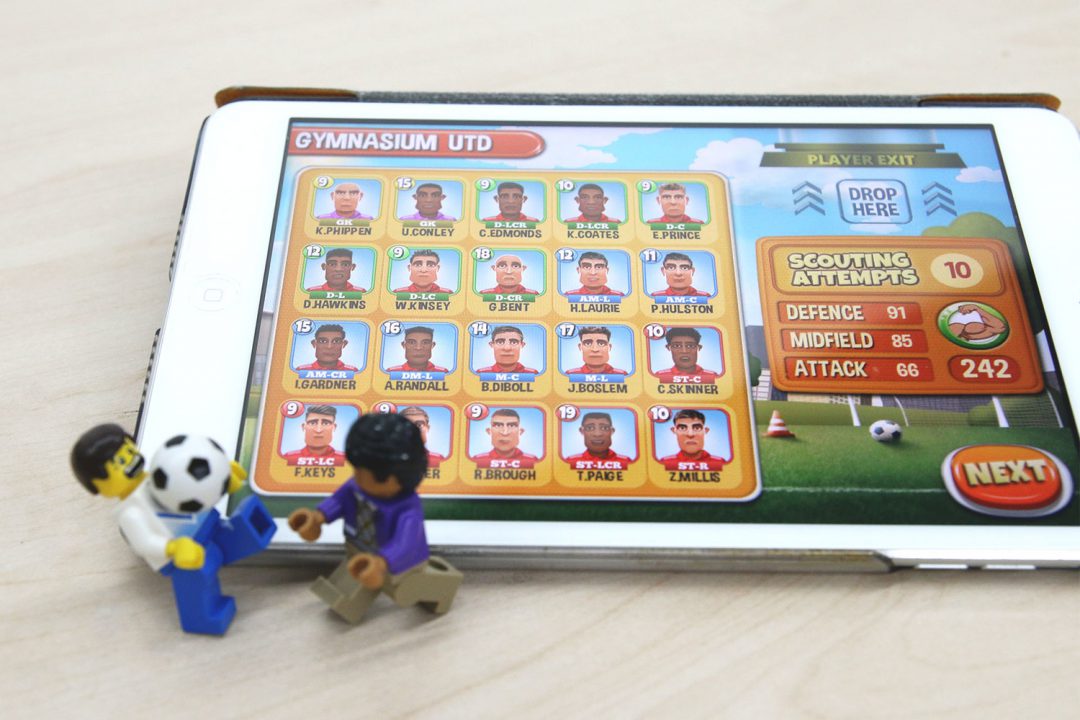 Just several weeks ago, we have witnessed the return of the football management sim king, Football Manager 2016 with its mobile and touch version. For those of you who haven’t played these games, I’d suggest you to read my review for the mobile version of FM2016.

However, I also did, realize, that these two games can also be considered as premium games for mobile games. With pretty expensive tag on its price, $19.99 for the touch version, and $9.99 for the mobile version, these games aren’t for everyone.

I do also realize that, some of you, still want to play amazing football simulation games with a more reasonable price. This latest game from 2bigpixels, will really relieve your thirst for a good football sim game, with a FREE price. This game is called The Manager: A Football Story.

The Manager: A Football Story – The Premise

The Manager: A Football Story starts with some unique approach that I believe will give fresh impression to you. You, will become the club owner, meaning, you will name yourself and your club name, you will also choose club’s color stripes.

However, there aren’t unlimited players available for you to scout. You only have 30 scouting attempts, if you reject a player, he won’t be coming back to you and you will get another player with similar position.

After you’re done with the scouting, you will be brought to your club’s home screen. In this screen, you will be able to view many information for your club. From trophy room, club’s stats and records room, up to the tactics for your team.

Your club will be starting their journey from the beginning, playing matches in the local park. Then, by winning every matches, your club will be living its dream, playing in the Gold League football and the electric atmosphere of a packed out super-stadium. This is what The Manager should aim, to become the Ultimate Football Manager. 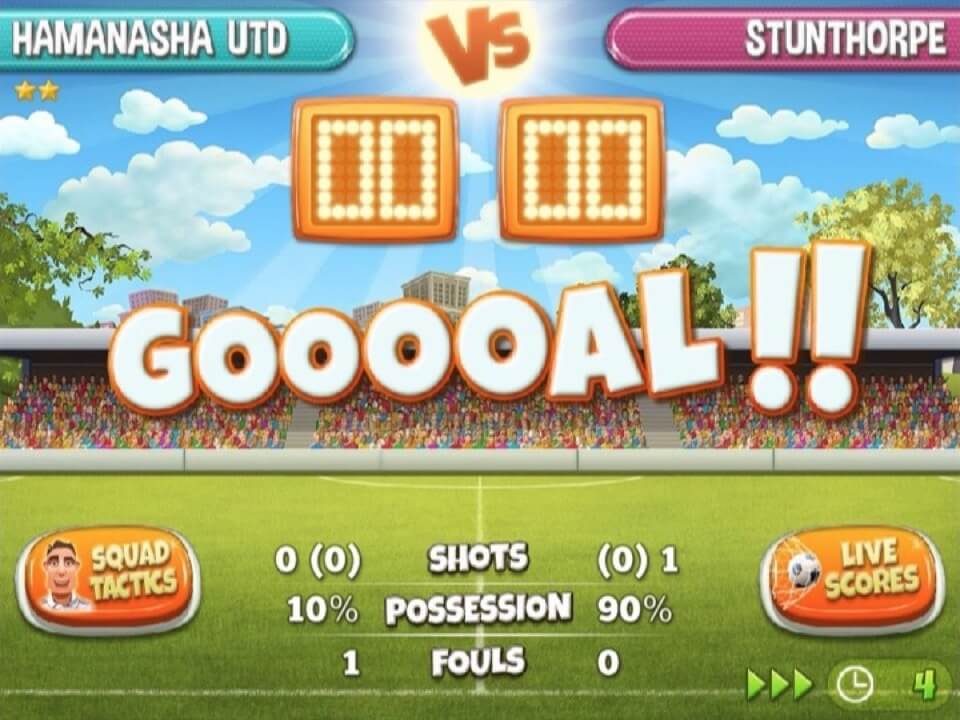 The Manager: A Football Story – The Gameplay

The Manager: A Football Story is a quick arcade style football management game. In this game, you will only spend less than one hour to complete a season. There won’t be any news or rumours lurking around you every day. You will just have to arrange tactics to conquer every match and if you’re able to win every match, then you’re done.

In The Manager: A Football Story, you also have the freedom to create tactics anyway you want, from the regular 4-3-3 formation, to perhaps an all-out-attack formation, leaving only one defender behind, perhaps? It’s all up to you as the Manager.

Just after you’re done with the tactics, you will start your first match. The match in The Manager: A Football Story is done with just a ball and some texts, in a glance. The more you’re playing with this game though, the more you will realize the detail lies behind. For example, the stadium, when you’re playing at the lower league, the stadium isn’t that big packed with audiences. It’s just a simple football’s field with no one’s watching. However, later on when you’ve reached the higher league, the background will be changing into a more epic stadium.

The match commentary also. If you just looking at it, you won’t realize, but the tactics that you chose, is reflected in the commentary. Even the ball is also reflecting the tactics that you chose. So for example, if you chose long ball tactic, the ball often will fly higher like it was kicked harder and the commentary will also support it as well. Moreover, you can also change the match speed, so you have from in-depth commentary, to quick play for your daily commute. 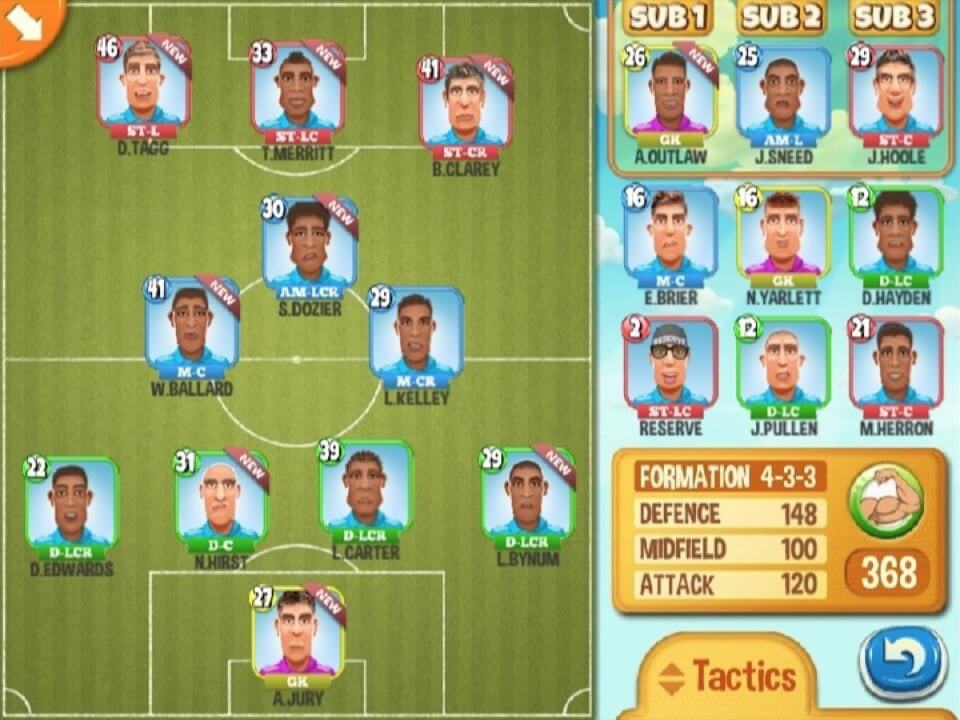 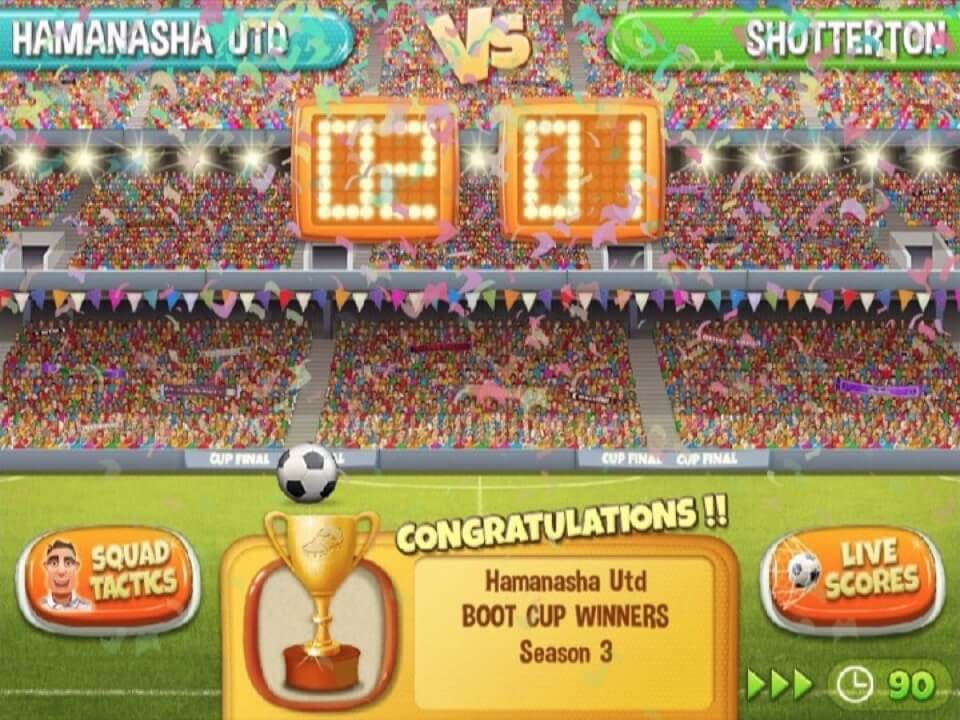 After you’re done with the match, you will be rewarded with some Bonus. This bonus is reflecting your performance in the field. It varies from goal bonus and match-related bonus, up to club-related bonus. Like ‘transfer record scoring a goal or making appearance’ bonus, ‘unstoppable’ bonus, and even in the end of the season, you will be rewarded with bonus if you’re unbeatable in your home/away play. There are also some unlock-able bonus exclusively on each league, so meaning if you have unlocked unbeatable home season in Silver League, in Gold League, you will be able to try unlock this bonus again.

Now, Bonus here, is the only currency used throughout the entire game. While the game is a FREEMIUM game, The Manager: A Football Story is no where near greedy. There are no adverts, whatsoever the shape is. Sure, there’s an IAP to get more Bonus, but just by playing, you will be able to get some.

Bonus, will be used to purchase or loan players. But before we’re talking about the transfer market, let’s talk about the players first. In The Manager: A Football Story, there are no real players. If you’re expecting to find Neymar Jr. here, I’d suggest you’re trying premium games that have all the player license and all. Players are all generated with three decisive stats, ability, age, and personality. 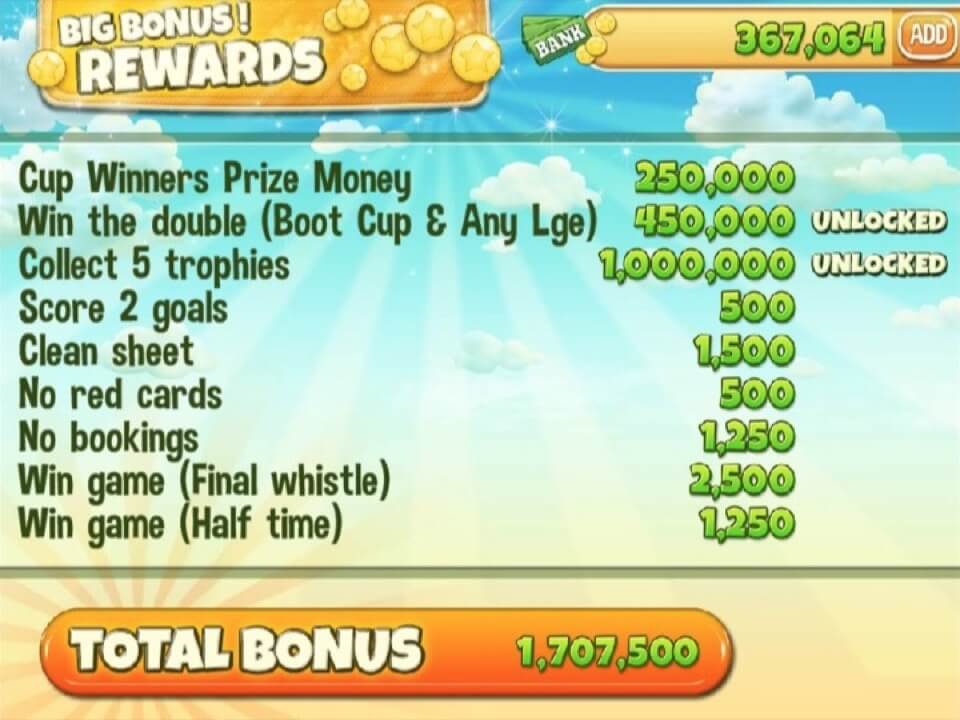 Let’s talk about ability and age first. Ability here acts like the value of a player. The higher ability a player has, the more valuable he is. On the other hand, age acts as a growth factor. The younger your player, the more likely he will improve. The older you player is, the less likely he will be improving, if not retiring in the next season.

I think many people would agree with me, that one of the factor of playing management game is the excitement of being able to empowering your team. In football, this period is called Transfer Window. However, in The Manager: A Football Story, this period is designed a bit differently.

Normally, there are two transfer windows. The first one is before the season started, and during the mid season. Well since this is their own game, The Manager: A Football Story put the same two periods, but the mid season, instead of being able to acquire more players, you’re only allowed to do LOAN and just for three players.

After the season ends, then you are allowed to buy and sell players again. The way you do transfer is also different. Unlike most football management games transfer period that require process to complete, The Manager: A Football Story use only one time transfer period, no turning back. 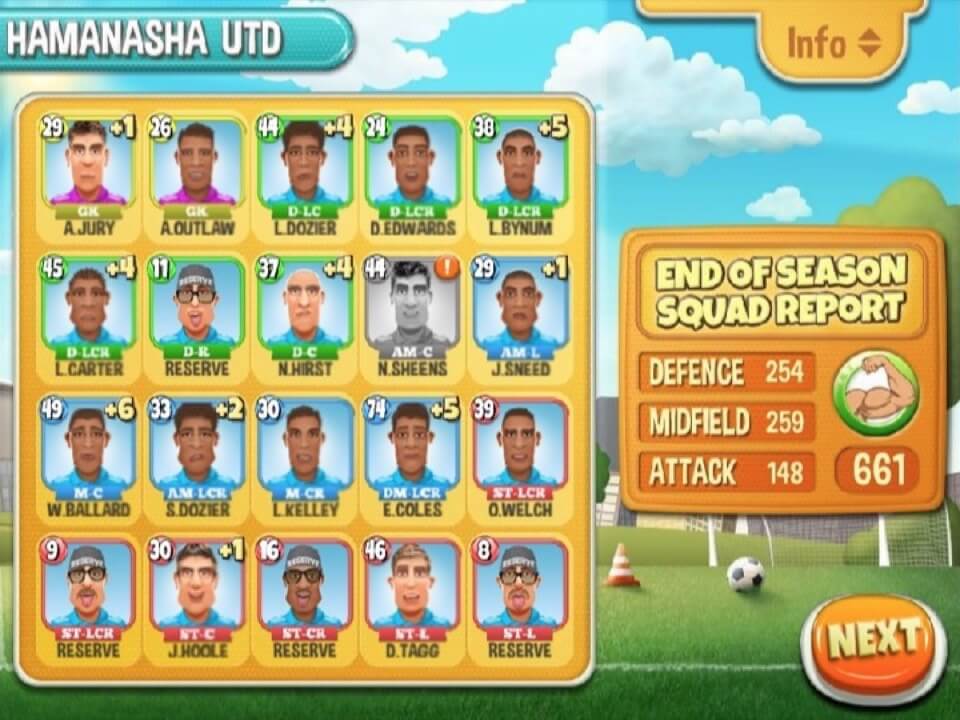 Afterwards, the second step is to decide which players that have to be sold. This move is also required to free some players slot in your squad. You will get some BONUS, but it’s not much. Then the fun part comes along at the last step, the third step.

At the third step, you will be given around 50 choices of players. You, however, can only acquire players according to your squad’s free slots and your bonus. Have less or none of this, then you won’t be able to do anything. If you have, you will be able to try acquire the player of your choice.

Which will brings you the next screen, the bidding process. Yes, you will try to win the bidding for your targeted player. There will be several other teams that are also trying to bid your player. There are 6 bidding steps, each step will eliminate the lowest bid team and at last bidding step, the time will always be extended until one team stop the bid. You can also activate the ‘Buy It Now’ button that will override the bidding rule and allow you to buy the player immediately.

Of course there are some extra details inside The Manager: A Football Story. For example, players with good personality will always cost you more than players with bad personality, even if their abilities are better. Also veteran players, will cut their price down with a bargain, so you will be able to bring experience with minimum cost. 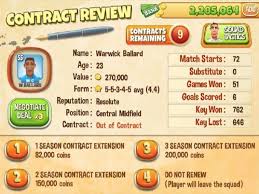 I love The Manager: A Football Story. I think this game really brings some refreshment in the midst of football management crowd. I feel like playing an entirely new game but with casual feeling, coming from its quick gameplay design.

I also love the freemium system built inside the game. I really think though, that at least The Manager: A Football Story should have put some ads inside or perhaps charge a premium price, since the game is so good and they deserve more than just a free game.

I also love the commentary detail put inside the game. Making the game feel more realistic, especially with all those dynamic stadium and the advanced tactics that reflected into the match preview.

And of course, the cartoon style art captures my heart. Love the choice of the color, love the character design, the way they smile, or smirk. The generated photograph that doesn’t look the same for one and another players proves the quality from 2bigpixels. 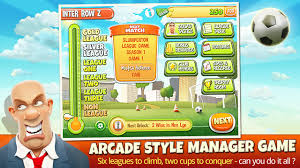 These tips and tricks are taken from 2bigpixels’s site, straight from the developers, to help you ‘kick off’ and climb those leagues.

I also have some tips to be added to this already complete list, some of it, regarding the loan and transfer window.

To have a ton of fun, creating high quality games that people all over the world will enjoy playing!

2bigpixels is an independent gaming studio based in Walsall, England.

Once upon a time… two friends banged their heads together in a pub, and out fell a bunch of game ideas. One friend is a coder, one is an artist. Together they spend their spare time laughing and making games.